When should I take social security?

When should I take social security?

When should I apply for Social Security? Many people approaching retirement age plan to claim as soon as they are eligible at age 62. They feel like they have paid into the system and deserve to reap the benefits as soon as they are able to do so. Also, fears surrounding the future of those benefits lead many to wonder whether there will be enough money left to breakeven if they defer their payments.

Social Security is a Big Part of Most Americans’ Retirement Income

According to a study by Vanguard, an estimated 91% of Americans aged 65 or older receive Social Security benefits and the average annual benefit is about $16,000.2 For about 60% of these retirees, Social Security represents a significant portion of their income. Even for affluent retirees (those aged 60–79 with at least $100,000 in financial assets), Social Security accounts for almost 30% of their total retirement income, on average.3 Given that Social Security provides a base level of guaranteed income for most retirees, it’s an important benefit for investors and their advisors to consider when designing a comprehensive plan for retirement income especially since only 23% of workers say they considered how to maximize it when claiming. Coming up with a strategy for maximizing benefits can dramatically improve your financial health in retirement.

By Delaying Social Security, Retirees Can Stretch Their Savings

While many clients initially think that taking Social Security at age 62 is the best plan, what many people don’t realize is that Social Security can be applied for and received in many ways; and there are varying thoughts and strategies to social security optimization. When planning with our clients at Wiser Wealth Management, we use social security optimization tools within our planning process to help us analyze each person’s situation in order to give them the best advice based on their circumstances. Some clients should apply as early as age 62, some at Full Retirement Age (FRA is listed below and varies from 66-67 based on the year you were born), and others as late as age 70. In the past, the decision as to the “right” time to claim Social Security has often been based on a break-even analysis of a retiree’s expected benefits versus his or her life expectancy. That approach, however, ignores two key features of Social Security. Once you start receiving it, it’s paid for the rest of your life in perpetuity and it is usually adjusted upward for inflation with cost of living adjustments (COLA). A big concern for most retirees is the risk of outliving their savings. For many retirees who can afford to do so, deferring Social Security for a few years (even past their “full retirement age”) greatly increases their lifetime monthly benefit. Given that at age 65, more than 50% of women can expect to live past age 88 (and 50% of men past 85), delaying Social Security can provide powerful longevity protection. 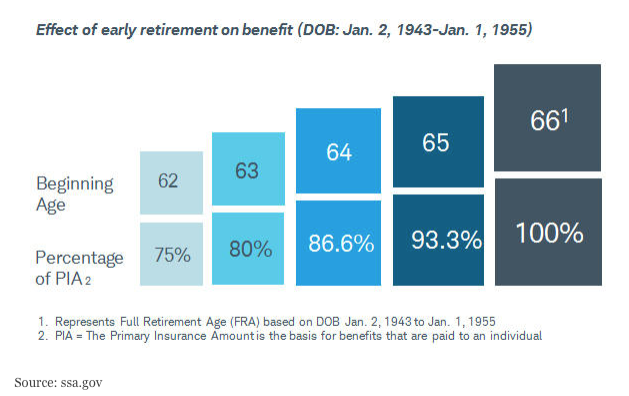 From 62 to FRA, benefits are increased by average of over 6% per year until you reach your FRA. As can be seen in the graph, FRA depends on the year in which you were born. If you wait past full retirement age, benefits would begin to increase an additional 8% a year as shown above. The maximum amount one individual could receive today on max 35-years of earnings and claiming at age 70 would be $3,790. It would be tough to “guarantee” clients 8% per year on any portfolio let alone a moderately diversified portfolio of stock/bond and various asset classes. For many, delaying as long as possible before claiming could be a key factor when strategizing a successful retirement plan.

Claiming Strategies to Help Retirees Make the Most of Benefits

This strategy for claiming Social Security came about in 2000 when Congress passed the Senior Citizens Freedom to Work Act. The purpose of this Act was to allow those still working to be able to stop benefits and delay retirement credits. Our example scenario was an unintended loophole, but Section 831 of the Bipartisan Budget Act of 2015 took that away. In the example above, Bill can still defer his social security payments and defer credits, but no payment can be paid out to his spouse or dependents until he takes his benefits unless the client was born before January 2, 1954, he/she has reached full retirement age, and the spouse is already collecting his or her own social security retirement benefit.

Today, the best way to devise a strategy is to make a careful review of Social Security regulations, your financial situation, and any health considerations you may have. (Note that the regulations can be complex, and you may benefit from seeking professional advice.) For individuals in poor health or with little to no other financial resources, early Social Security claiming may be appropriate, but for most retirees, the increase in guaranteed income gained by deferring Social Security makes waiting to start benefits an appropriate strategy. The accompanying chart shows the potential impact on a couple’s lifetime Social Security income of three different approaches: both spouses claiming at 62 (the earliest possible age), a hybrid strategy where one spouse claims at age 62 while the other delays until age 70, or both spouses delaying until age 70 to accumulate the maximum amount of delayed retirement credits. For example, as shown in the hypothetical example below using our MoneyGuidePro software, the clients would receive more of a total lifetime benefit and higher probability for success in their plan by waiting until age 70.

This strategy would not only provide more lifetime income benefits in retirement if they lived to age 95, but it would also increase the probability of success of their financial plan. Depending on a couple’s ages and incomes, it might make sense for one spouse to claim at FRA and the other, the higher-wage-earning spouse, to wait until age 70. However, if possible, the numbers usually work out best in the long run if we can bridge the gap with tax efficient portfolio withdrawals from retirement age to 70.

Pensions and Other Factors

Pensions and taxes can also affect your social security benefits. The Windfall Elimination Provision, or WEP, as well as The Government Pension offset, GPO, reduce individuals and their spouses’ benefits:

What if Social Security is No Longer Around?

Over the last few years, Americans entering retirement have feared reductions in Social Security benefits and those new to the workforce have feared the dissolution of it altogether. The coronavirus pandemic over the past year and a half has only amplified these fears. The United States has been in jeopardy of depleting the Old-Age and Survivors Insurance (OASI) Trust Fund for quite a while. Recently, it was anticipated the fund would become insolvent by 2035, however, due to Coronavirus that number has moved closer to 2033. After that point, income and payroll taxes would only cover 75% of the benefits. There are many reasons for the decline, and some have to do with longer life expectancy than previous generations.

Due to the aging population of the baby boomer generation, the Trust will be distributing more in the form of income than it will be receiving from revenues. Unfortunately, coronavirus has also helped intensify this issue, and some believe the benefits could be depleted by this decade because of the record levels of unemployment. However, Congress would be able to hold off the decline by reducing benefits, means testing, increasing revenues through payroll taxes or even raising beneficiary ages. When and How Should I Apply?

According to Social Security Administration, you should apply for benefits four months before you wish to have them begin. You can sit in line at the SS office or call by phone, but like most things today, it can be done much more easily online at ssa.gov by following the prompted instructions and providing identifiable information.

At Wiser Wealth Management, we focus on social security optimization as a cornerstone to planning and increasing cash flow for the effectiveness of future financial plans. Should you have any questions, please reach out to us at wiserinvestor.com or by calling 678-905-4450.